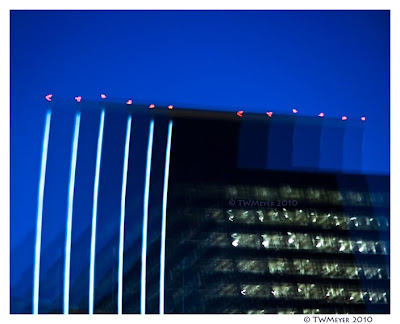 Here's a re-dedication. More writing. Not too much extemporaneous. Not so literal (a conundrum for the age).

Most of my work lately has been on an organized image library (now up to 28,909 images), but I've also realized (perhaps due to that personal retrospective) that I have been neglectful as an artist. The commercial photography that I veered into over a decade ago had seen it's hey day (or is that hay day?) at least a decade before that. Now the metaphor has superceded the representative and I'm back where I started, making pictures of things that aren't in the picture.

I've been rethinking the reasons I chose this path, and arrived here. Making photographs that just look like the things photographed is becoming a poor way to make a living. Photography is different now (how long ago did this actually happen? I've apparently been asleep. Dreaming perhaps) .

Another change is that good technique is now bad, and I don't mean in the parlance of the hip (as in "That's sick, man", which now means "that's good".) I mean that those who can deliberately and repeatably show a consistently bad technique (stylistically consistency) can parlay that willingness and ability to suck into a lucrative career. I don't need to name names, just pick up any counter culture or fashion mag and you'll know what I mean. Wedged into that dreck is some truly inspired work, masquerading as focused indifference to perceptual reality. Work produced by smart people laughing on their way to deposit more cash into short lived (but well stuffed) bank accounts.

In any event, a cycle has come around, and a slow awareness has bloomed. There's a great editorial by Roberta Smith in The NY Times that for some reason, has held my thinking and will need several re-readings to hold dear. But let me recommend it.