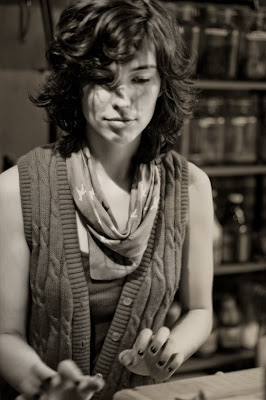 Here I raised the contrast some with the Tone Curves, using one of my custom Lightroom Presets as a kicking off point. I moved away from red, added some contrast and bumped Fill (a weird combo, counter productive one might think). The adjustment brush lightened her left eye up a little. Clarity ended down in the minus.

Then in Photoshop, converted the 16bit PSD to 8, added a layer to get to the Diffused Glow. Worked it a while and then added a layer mask to bring back some of the darker and lighter areas that had moved too much.

The original image posted last night was not enough for her... t

She makes the best Americano. Really. From the D700 NEF, through LRv2.3, now a custom preset
it still needs work

I've been told I need a blog.

I've been told it's an asset to reveal how much (or how little) I know about my profession. Ha.

I had thought that just putting images up would be sufficient evidence that I know what I'm doing with a camera and light (and that other stuff in a photograph). But no.

There is a lot more to it. And that, apparently, is the valuable stuff. Like the hours I spend with software. And hardware. And theoretical positioning with other artists as to the relevance of what we do, and how it is perceived.

Apparently, this stuff matters too.

Well I know it matters to me. But does it matter to anyone else? And is anyone else reading this? Apparently not. Or maybe you are looking, but are shy of the "comment" button. I mean, I rarely say anything... why should you (if you're even here)?

So it begins. I trash the concept of a blog with images and minimal words, to join the mass of private publicity in the excessively obese (that's redundant) blog-o-sphere.

I will try to stay thin and focused. And not be stupid on the internet.

OK, here you go: I've been shifting pointedly back into duotone work.

Having left that behind in my cobweb covered darkroom, it restarted with the Nikon D700, which has capabilities that offered black and white digital capture at a quality my personal standards could accept. It has excellent high sensitivity resolution, tonality and focusing all in one package, with a neat built in capability to build my own profile using color contrast filters and duotoning of the images. Pretty exciting.

Then I discovered the down side. The profile only sticks to a jpg. The NEF (raw file) instantly becomes a color image when opened in Photoshop's ACR (Adobe Camera Raw) and in Nikon View if you want to make any changes to it's saturation (which is not one of the adjustable parameters of the in-camera profile).

I am working entirely in Lightroom (v2.3CR) or Photoshop (still CS3) and am not going to spend a hundred bucks on the creatively talented and cute but insane Capture NX2 (I've had girl friends who were like that. No thanks). It pains me that Nikon won't make the immediately previous version of their flagship conversion software compatible with their newest $3000 camera. Life is tough. I go to Adobe and keep my hundred bucks. Neither will I shell out $200 for Silver efex, which is fun, but not that fun. I'll look at it again when I have money (not holding breath).

So I have been using LR's presets (I've made about 20 of them) to customize my duotoned imagery. The in camera jpg acts as a proof, that lets me assess an image's effectiveness as a duotone. I have not been able to force myself to settle for a more compressed or smaller jpg (coming soon to a mindset near me), so my back up protocol expands hugely in time and bytes. I do need to work on that. This issue is compounded by my new affection for the DNG format, which is tempered by my distrust of corporate stability (where did that come from?). So now I have JPG, DNG and NEFs of all duotone images and NEFs and DNGs of all images. sigh.

So there's my topic for the next entry: file formats and image backup storage. sigh... t
Posted by T.W. Meyer at 8:16 AM 3 comments: 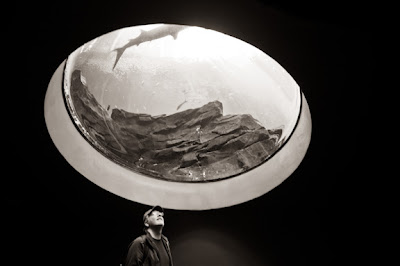 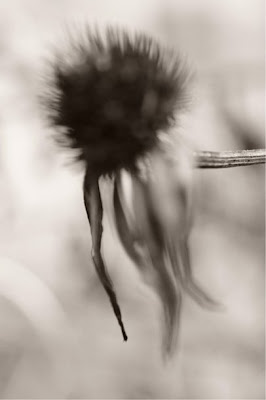 estate rimane
the remains of summer
Posted by T.W. Meyer at 3:48 PM No comments: 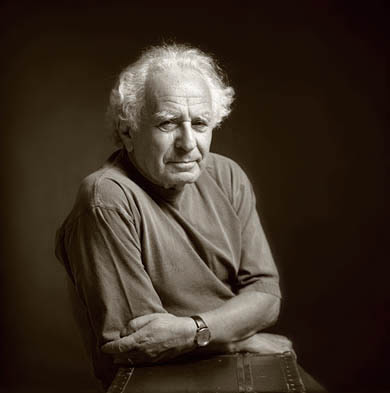 I made this portrait of my friend years ago on his 69th birthday. A handsome man who, when I showed him the Polaroid (yeah, that long ago) he said "Oh Tom, guess what?" (What... Gene?). "I am an old man". I told him that everyone knew that, except (apparently) him.

I see, on a pretty regular basis, older guys making idiots of themselves around younger women and I think some of that is an inner vision of themselves that stopped aging somewhere around college. They deny what is revealed in the mirror every day, by engrossing themselves in detail; the beard, the hair, the clothes. And they continue to hit on girls that are grossed out by their incredible lack of self awareness.

I decided that day with my friend Gene, that I didn't want to wake up one day with the startling realization that I was old. I'd rather keep track of what I look like and not be shocked like Dave in 2001 A Space Odessy, suddenly seeing myself sinking into my death bed, and wondering, "when did I get old?"... t